My apologies for being a day late again. I have a couple freelance projects that bottlenecked a bit, I am actually blogging while waiting for a render to finish up. An article I read last week from a friend actually inspired me to write one last entry about my trip to Japan, which seems long time ago already. Blogging about the trip and looking at pictures to post has really been a fun way to look back on my trip, I would strongly recommend it to anyone. Clearly, I would strongly recommend a trip to Japan as well as going through the agency I did.

I basically wanted to run down some of my favorite things, favorite foods, best experiences as well as share some pics of the haul of goodies I brought home and more.

Since there may be some foodies out there, lets go over that first. My friend and I had the intention of finding fugu, or pufferfish. Pufferfish is poisonous and will kill the consumer if the chef fails to prepare the food correctly. There are next to zero deaths a year of consumers dying from prepared food, most deaths come from fisherman that eat the fish in the wild. During all of our adventures we seemingly pushed this endeavor back each day until we basically ran out of time. This is on the list of things to do on our next trip.

My favorite food came from a ramen shop and the takoyaki from the street vendors. I would have to wayward an honorable mention to the squid I ate from a vendor as well, I am a little disappointed I didn’t get a chance to eat octopus. Again, next time.

Japan has a lot of lemon flavored drinks, which I miss greatly. A specific drink was CC Lemon, I have been looking for somewhere to get it from in the states, but to no success yet. It will only be a matter of time.

My favorite place that we visited would have to be the Ghibli museum. As an animator, it was the closest thing to heaven I could have imagined. I wish I could have taken pictures inside to post, but I settled for a book with pictures of the inside. If you haven’t seen any of the Studio Ghibli films, I strongly suggest you give a couple of them a chance. If you ever visit Japan, this is a must see site. They even show short films that you can only see at the museum.

This was also the first trip I was able to see the ocean. Some of the funnest moments I had was around the ocean. On one occasion I went seashell hunting and found some shells to take back to give to my sister. My second ocean experience was when we were in the country and we had a group of locals want their pictures taken with us. The people in the country were extremely nice, especially at the festival events.

My favorite experience was climbing Mt Fuji at night and witnessing the cities at the foot of the mountain’s fireworks. As I stated in a previous entry, climbing Fuji was one of the most mentally demanding things I have ever done, but it is also one of my proudest moments. I would like to climb the mountain again.

Probably the most unexpected awesome experience was the ryokan. I had no idea what to expect but I was pleasantly surprised. The breakfasts were amazing, we walked around in yukatas the majority of the time we were there, the hot spring was amazing and the customer service set a new standard. When I go back to Japan, staying at a ryokan is on the top of my list.

The arcades in Akihabara were super fun, you would be surprised at how far you can get in a game just based of user interface design and game animation without understanding the language. The card reader games blew my mind. Shibuya had some musicians playing, I would like to return and go listen to some music some night. Theres something very cool about walking down the street and seeing various musical acts and being able to stop and listen at will.

I had a pretty good toy and book haul on the trip. I ended up with a book about the art of Princess Mononoke and also a picture book about the Ghibli museum. I also ended up with 3 production art books from the series Neon Genesis Evangelion as well as some Asuka chopsticks that I eat my cup noodles with. I picked up a giant list of gachapons, from various stores in various areas. The coolest was a store that you could actually trade your gachapons in to and buy other people’s trade ins and complete your collection. My favorite toys were small figures from Neon Genesis Evangelion I picked up in sealed mystery boxes.

While in Japan, I wanted to pick up some anime cels. In early 2000 animation went into the digital realm, which meant that cels were no longer being used to make animation. For example, you can not find cels of newer series, you can only get them of older series. Studios sold cels to fans as a way to make money and provide fans with content that they didn’t have much of a use for. At the cel shop, I could’t read any of the names of the binders of series he had. I did stumble across some binders of Inu Yasha and bought 3 cels. 2 of one of my favorite characters, Miroku and also a cool cel of Koga from the same series. I found some binders of Dragonball Z, but most of the cels were missing backgrounds and I want my cels to have background art. On my next trip, I plan on taking more money to get more cels. It was cool when we found a small gallery displaying cels and art of Rouroni Kenshin.

As for me, I would like to return to Japan again. I am targeting the spring of 2014 for the spring festivals as my next trip. Hopefully the stars align and I am able to get the trip lined up. If you get the chance or are looking for a trip, I highly suggest Japan! 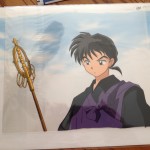 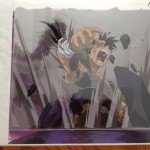 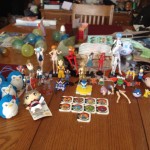 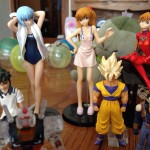 *(Images of my anime cels and also of my toy haul from Japan. Makes you want to go doesn’t it?)