Where are you from?
Chicago, IL, USA

Why do you want to be a voice actor?
As far as work goes, I have not done anything more rewarding or exciting. With voice acting, you get to bring life to characters. You see the world through their eyes, which means every day can be a new adventure.

Who is your favorite VO actor?
With all of the different styles in which voice work can be approached, it is hard to pick just one. Bill Dewees, Marty Glickman, and Mark Graue are some of the “bigger” names that come to mind. Of course, since voice acting is very much the same as traditional acting, I can’t leave out Jack Nicholson, Michael Caine, and Christian Bale. There are many other individuals within the community that have played a part in my development, however.

Who is your favorite anime/game/cartoon character?
I would have to say Cloud from FF7. The “old” cloud though, not the new one. The new one is a little too emo for my liking.

If you could voice any character, who would it be and why?
It would be pretty cool to voice The Joker, but I would definitely have to expand my range. I think the challenge would be interesting.

What drew you to audition for Cosmic Rage?
I like projects with originality and a solid plan. Cosmic Rage had both. It is extremely important to me that a project manager be organized. If they do not take their work seriously, then how can others have faith in their project? Chris Biewer has been nothing but professional; which is one of the reasons I decided to sign on to this project. 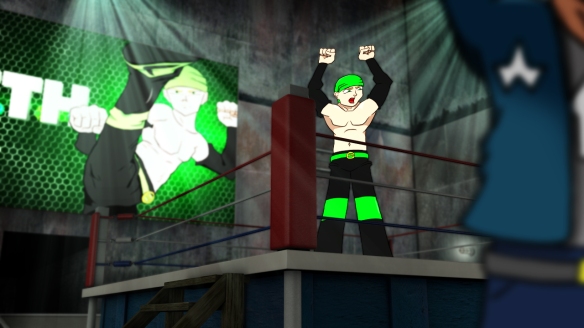