Last week there was some work to do on the back end of the site, routine web maintenance, so I didn’t get a chance to update. So let’s get into it!

I started working on polishing up the script for the second episode. It has been a while since I had a chance to look at it so it was a nice time to work with it some more and get familiarized with the contents again. I got about half done with it this past week, so my goal is to finish it up by the weekend so I can get some more eyes on it to look at and see if they can poke some holes in it. 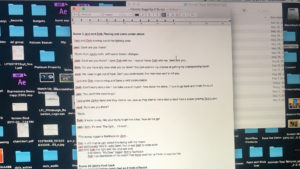 While the script will be with a handful of people to take a look at, I will be spending the time after that to prepare for a local art show, giving Cosmic Rage the chance to get in front of more people but also to help explain the animation process to people who may not know. I am very excited to see my work hanging up in a venue again 😀

With convention season approaching, I’ve been working on getting a few panels submitted to some conventions I have planned out to travel to. Most of my convention season is going to be late summer and into the fall since this is a pretty busy summer but you will get a chance to see me at conventions in 2017!

I am starting another freelance project which is needed. Since my Patreon page hasn’t quite covered my VO costs for the second episode, I needed to pick up a project. This will also help with my convention travel this summer as well so it’s just a small price to pay. But in terms of timing it works out really well since the script will be making the rounds to trusted friends and writers and while some files will be at the print shop for the art show.

Thank you everyone for checking out the blog and as always, thank you to my Patreon supporters for their continued support!