This week’s production update, featuring voice over updates, animatic updates as well as some 2018 convention updates.

It has been a while since I posted so I wanted to wrap up the holiday weekend with a production update and share my absence. Shortly after attending Nebraskon, I came down a case of con plague and I was shelved for a few days. Then we started to travel to my sister’s house for the holidays.

Over the holiday weekend I have been working with some of my voice over talent and getting some paperwork in line and getting scripts and questions resolved. I brought my tablet along to do some work while on the holiday break but after being full strength for a couple days, I caught something else and am under the weather again, which is why I am writing this weeks update as opposed to hopping in front of the camera again. Once I am back up and running, I will recap Nebraskon and share more information about episode 2.

I hope everyone had a fantastic holiday! Talk soon 🙂

This past week I had a work retreat so I was offline and unplugged for a couple days. After the work retreat I had some catching up to do on my TA work. Anyways, I got my voice over budget put together and have heard back from most of the voice actors. The plan is to be reaching out to them this week and start getting materials put together to send out.

This weekend I have a convention, Nebraskon. I am looking forward to going to Nebraskon again, it is one of my favorite conventions to check out. This year I am presenting three panels, two of them are on animation.

Other than that, last week was a little hectic but I am looking forward to pushing on this week and getting more elements put together for the animatic for episode 2.

As episode 2 gets kicked off, I contacted all of the voice actors and set up a schedule of things to come in November!

Little late with the production update this week, been feeling a little under the weather the past couple days. Anyways, as you can see by the title of this blog post, the thumbnails for the second episode are all done! I’ll be sharing more of this very soon. So what is the next step? Well, I am planning on reaching out to voice actors over the weekend as well as audio production personnel and getting everyone on board again to start production.

I’ll also be working on fleshing out more of the shots for the first scene in episode 2 and preparing an animatic. If you aren’t sure of what that is right now, don’t worry, I’ll get you up to speed with some more behind-the-scenes content. Now that production is starting there will be more content coming. I am very excited to share some new stuff with you all. Video update coming at you next week again! Stay Tuned!

I wanted to record a video this week, but the week took a bit of an unexpected turn. We had a death in the family so we spent some time away this weekend helping to go through some things and just to support other family members and plan for a funeral later this week.

I completed 2 more chapters in my book on animation production and have crossed the hallways point. I am on pace to finish the book while on vacation, which will help me form a route on episode 2 for Cosmic Rage.

I also completed my orientation for my online class, which is a go at your own pace, traditional animation class. I plan on documenting the progress of the class and hopefully recording my work as I go through it. The first video/lesson is planning out a shoe animation with timing charts and such. This will be a good way to knock off the rust and also try out some new tools, AnimDessn, a plug in for animating in Photoshop and also my new Cintiq which I haven’t used nearly enough since I purchased it. I look forward to sharing everything with you! Let’s get to work!

Our wedding was fantastic and ran smoothly. No issues at all and it was fantastic to see so many of our friends and family in one place. The downside was that we didn’t get a chance to talk to everyone as much as we would have liked. We had a blast unplugging for a week after the wedding on our honeymoon. We got outside and did all kinds of hiking. We talked about so much stuff it felt like we were dating again, which makes sense, because so much of our conversations lately have been dominated by house and wedding stuff over the last year. Getting a little sentimental already, right? Anyways, I will be back Monday with a video post and also inform you all of what is coming up.

I appreciate all of your support and continuing to check out the blog and see where things are at.

Time to get back to work!

May is shaping up to be quite the busy month, both personally and also for Cosmic Rage. Script 2 is still in development, I have received some good feedback from trusted friends and still need to dive back into it and polish it up before jumping into storyboards.

May is also a big month because Cosmic Rage will be showing at it’s first film festival and I will be attending. I spent this week laying out a lot of production art for an art show this month as well. 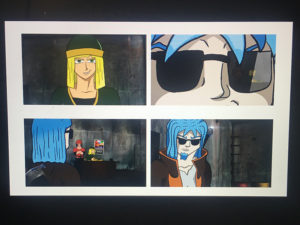 I have pages prepared and dropped them off at the printer to get ready. I still have a couple more that I want to lay out. Those pieces would show more of the production of a scene, from illustration to inking, coloring and compositing. I look forward to sharing more about this process soon!

The first script draft for episode 2 is wrapped up. I am passing the script off to a couple other script-writers and film-makers for them to take a look over it and try to poke some holes in it in case I missed something or if I need to clarify areas that pop up. I am very excited to be sharing it with people and having them taking their first look at it.

I am going to give them some time to look over the script, so in the mean time, starting this weekend, I am going to be laying out files for an art show in May at a local coffee shop. It’ll be the first time that Cosmic Rage artwork will be hanging up for people to see and also see the process and behind-the-scenes type work for the project. Everything will be ready to go after the weekend to take to the printer.

I am going to do some behind-the-scenes content on the art show and the preparations, so I will have some new video content coming up next week. Thank you for your support! Good things are coming 😀