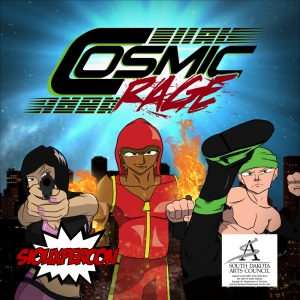 Remember last week when I said I had some things going on behind-the-scenes? Well here part of it is. A DEBUT screening of Cosmic Rage is going to be held at a debut con, Siouxper Con, in my home state of South Dakota.

I can’t really put into words how excited I am to get to debut Cosmic Rage in South Dakota. Many people here know of the project and have supported it. However, there wasn’t a great avenue to get it debuted to anime and comic minded fans. Enter Siouxper Con and their amazing staff for allowing me to debut my work in South Dakota.

Following the screening, I will being a Q/A with those in attendance about the production of the project and also what the future holds for Cosmic Rage. Looking forward to seeing you there!

Again, a big THANK YOU to the South Dakota Arts Council for supporting Cosmic Rage. An exciting 2016 starts now!