Hey everyone! Things have been a little quiet on the update front last week. I have a lot of work I am catching up on so I need to take a break from the blog for probably a week or two to catch up on some work and I need about every waking hour I can get on some of these projects. I will get back at it as soon as I can and look forward to continuing work on episode two and animations tests.

Thanks again for the support, it is greatly appreciated!

It has been a little bit of a rough past week. I ended up tabling my animation tests due to migraines all week. The previous week before I had a cold and a sinus infection and I am not sure if the subsequent migraines were a result of just getting back to full health or if they are part of something else. I have been exploring a new diet recently to see if that will help, it seems like when I try new things to see if they work it solves the problem but then it comes back. It could also be a result of not being able to get out doors and naturally spending more time in front of the screen too. I am going to find a solution to this.

On the animation test front though, I completed a minor test that I mentioned before, using 4 mouth shapes of dialogue scenes. The next test I want to do involves using 7 shapes and seeing if that offers a more fluid solution. My aim is to render these scenes out side by side and share them.

This past week I also started a new session for teaching assisting through School of Motion, something I have been doing for a year now. I love to help get people into animation and that is what I love doing at School of Motion. My aim is to bring some of that animation eduction to Cosmic Rage as well, I am still working out the best solution for that. But this also allows me to build up some funds to cover the recent tablet I purchased and also going to help cover costs of VO for episode two along with funds from Patreon.

I really appreciate all of your patience as I get back into the full swing of things this week.

This week I started working on some animation tests for Cosmic Rage. The first issue I wanted to tackle was mouth movements for the characters. The workflow adjustments I am making here, involves using a tool called lipsyncr. This tool allows for After Effects to analyze the voice over file and make adjustments to cue up certain frames for mouth shapes called phononyms. That way, I can get around using just lip flaps and also drawing each frame individually. This tool allows for you to use various levels of detail in this regard. In this test, I used only 4 mouth shapes, testing out the low end of the spectrum. The high level of detail allows for 12 mouth shapes. My next test is going to involve the in between setting that uses 7 mouth shapes.

Keeping up with the theme of “New”. I ordered my first new tablet since my very first one I ordered in college. For the second episode, I want to do more frame by frame drawing and a traditional tablet, just wasn’t working the way I want it to. Some lines were jittery, and it may take several strokes to get a line the way that you want it to. I felt that in order to really make this an effective workflow, I needed to upgrade my tablet situation. So say hello to my new Wacom Cintiq. 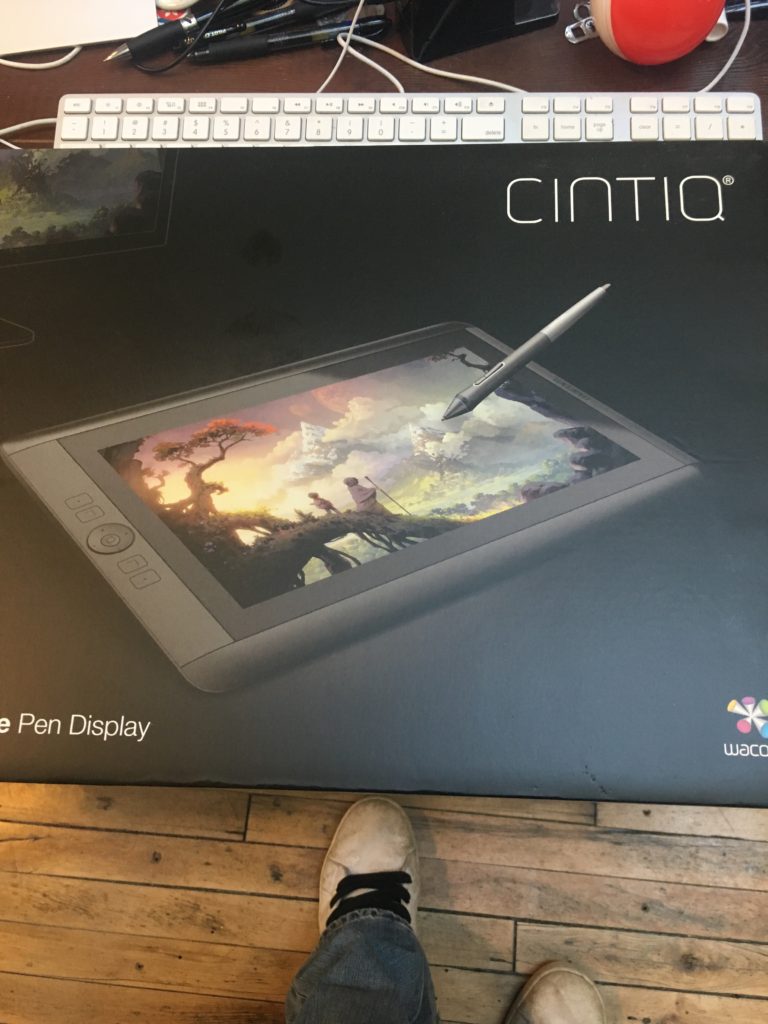 I spent the later half of the week exploring the tablet a bit and working on setting up some various settings for hot keys to really make working with it efficient. I am planning on using the Cintiq for my next animation test using lip syncr. I will break down these various forms in depth upon completion.

This week I am starting a new session of teaching assisting online as well to kick of 2017. So when I am not at work or critiquing work, I will be working on the new animation tests. 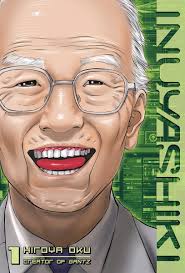 Over the holiday break, I took some time to catch up on some manga that I have been meaning to get to. The first item up for reading, volume one of Inuyashiki. This series became my priority for reading, since I read that it is supposedly getting an anime series. It is done by Hiroya Oku, the creator of Gantz. Gantz is one of my favorite anime series, due to the social commentary it contained, but admittedly I have not read all of the manga. One of my favorite things about that franchise is the difference between the manga and anime. I wanted to flip the script on this series and tackle the manga first and also before I fall too far behind, so let’s dive in and see what this series is all about. I wanted to see if it packed the same social punch as Gantz.

The story centers around Ichiro Inuyashiki, a 58-year-old man who is very shy, timid and lacks confidence in himself. We get glimpses of his life, how his interactions with his family and how he fits into society. Needless to say, it’s very uninspiring and you can see that Inuyashiki’s strategy is to basically get by in life, remain hidden from trouble and not to cause any form of confrontation, whether with family or strangers.

But his personality and place in society is not the only thing going wrong with Inuyashiki. We also find out early on that he has cancer and doesn’t have long to live. This life changing diagnosis, inspires him to purchase a dog and they quickly become best friends. A friend that Inuyashiki feels like he can talk to, quickly developing a relationship more in depth than that even with his own family. However, one night, Inuyashiki takes his dog for a walk and has a terrible, unexplained, accident.

Throughout the next few days, Inuyashiki struggles with himself, not feeling like he is the same person he was prior to the accident but also still confronting the fact that he is nearing death.

If you don’t want the first volume to be spoiled, I would suggest not reading much farther.

Inuyashiki, feeling ill, visits doctors and more to get clarification on his diagnosis. These medical tests all come back with errors and the doctors are baffled with the situation. It is revealed that Inuyashiki has now become a robot. With his newfound robot capabilities, Inuyashiki starts to change and decides that he can explore his new capabilities.

While out, Inuyashiki comes across a homeless man that is being assaulted by a younger crowd of kids. This is a topic that makes it’s way into Gantz, so I am eager to see how this develops in future volumes. Inuyashiki is able to help stop the attack and even uses some social media components of his new powers to share the attack and information with other people through sites like Youtube and more.

I felt that the first volume of Inuyashiki was pretty intriguing. I don’t know of other series that have an older super hero. There are also many different social angles I am interested in as well, the role of the homeless (given the fact that it was involved in Gantz as well), how Inuyashiki will handle and adapt with his powers, but most importantly, this concept of public shaming the attackers through social media. I will have a review of more volumes of Inuyashiki as I get them read, I think there are currently 4 or 5 volumes out so far.

I hope you all had a fantastic holiday break! My holiday break was much needed. It offered me a nice chance to unplug for a bit and get away from the computer. I spent some time over the break doing some reading and playing some new board and card games which I always enjoy. After several attempts, my family and I were able to complete Oregon Trail and we even got in a good game of Walking Dead Risk, which saw so many zombies take over that we had to use colored trucks that come with the game to make up all of the zombies because we ran out of game pieces.

I scored some goodies for Christmas, some new anime and manga. On the anime front I got some new movies and series like Death Parade, The Girl Who Leapt Through Time and Coppellion. I got two more volumes of Bakuman, which I need to complete the series. I have a few more volumes I need to get as well. I even got the Archer art book too, which offers a lot of information on the history and process of the show. But enough about the holidays, let’s dive into the first production update of 2017!

I wrapped up my final animation test this past week. I spent some time experimenting around with a new plug in for After Effects called Paint and Stick. It offers the artist the ability to draw frame by frame within After Effects. I loved the idea of that, since I work with the program daily but I didn’t like the brush set within it. On the surface, it doesn’t appear that  have full control over the brush like I would have with Photoshop. I can do a lot of the other things in Paint and Stick as I can do within Photoshop, such as creating various layers, coloring and more. However, part of my hesitation to fully commit to Paint and Stick, is the unknown of future updates and workflows. So with this in mind, I am going to do my in depth animation tests using the Anim Dessn extension for Photoshop. I will post these up when I get them done. I am going to start tonight on my first test, and working with some lip syncing tools to get more mouth movements for the characters.

On a similar note, as much as I love my Wacom Intros tablet, it was time for me to upgrade. I ordered up a Cintiq this past week so I have more control over my drawings in the second episode and also for frame-by-frame drawing. I am very excited to get started with this new tool. I will use this on one of the other animation tests I will be working on in January.

Finally, I also have been doing a bit of reading this past week too. I recently ordered a book called Independent Animation by Ben Mitchell. It covers a wide range of elements in independent animation, ranging from music videos, collaboration, funding and more. I am about 25% done with the book. I have really been enjoying it so far and it’s quite nice to hear another perspective on the independent animation scene. I will be offering up a full review once I get it completely read.

Thank you for your continued support!