Whoa it’s been almost a month since I have been on here, writing updates and sharing the current state of my project Cosmic Rage.

It’s been a very exciting time and there has been a ton of things going on since I last blogged. I don’t like taking long breaks from the blog but there was just a lot of life event going on and Cosmic Rage was put on hold for a bit to get things sorted out. So let’s back track a bit and get all of our bases covered!

I was at Anime Fargo last month and really enjoyed the con. I had a great time talking with new people and seeing some familiar faces. I have been to Anime Fargo each of the last 3 years, which is how long the con has been running. It is always a good time to chat and catch up with people there. I met some awesome people in the Pokemon party room that were kind enough to share info about the local nests. In between events I was able to get to a nearby park that was actually a Bulbasaur nest!

After Anime Fargo, I spent the time finishing up packing for the move before I left to go on a family vacation. When I am on vacation, I really like to unplug so I try not to use social media since I am typically online for over half the day anyways. It’s a nice time to relax and enjoy nature. I did my first (and only so far) inktober piece on vacation as well. I was inspired by the ocean and the nearby Pokemon gyms so I drew up a Lapras.

Once we were back from vacation, it was time for the move. We spent all weekend moving things from our apartment to our new house. Plus, we had to remove our community garden too. Talk about a relaxing weekend right? Yesterday the internet was hooked up so I could get back online after work and get updates posted and get back into the swing of things.

So what is on deck for the upcoming week? Well, my e-book revisions are in. So I need to sit down this weekend and get those knocked out. Ideally I would like to get the book into the store over the weekend too. But I am not 100% sure how that process works since this is my first e-book. The other task at hand, I need to get my desk put back into place and get it ready to go. Things are moved into rooms, now it is just a matter of unpacking and putting things in order.

I am ready to get back into Episode 2!

Our final day in Japan was a little bit of a lazy day. We hadn’t really had anything planned except for hitting up a few areas that we wanted to revisit. For the duration of our trip, we constantly saw signs pointing to a Pokemon Center nearby at the train station we used daily. We decided that we would check it out. We sadly discovered that it was basically just a store with a ton of Pokemon gear. We thought it was going to have a different layout than just being a store.

When we went to the Evangelion store earlier in the week we picked up a magazine that had other Evangelion sites we could visit and get stamps at. We didn’t do the stamp collecting but we did go check out a giant slide of one of the main characters, Rei Ayanami. We also stopped at the Evangelion store by the slide but it was a rather small one that had mostly the same content as the other store we went to. By the Ayanami slide, there was other stuff advertising for various series, old and new alike. In this area there was a giant steampunk clock.

We headed back to Akihabara for some ramen and we also went to spend the last of our loose coins. When exchanging Yen back in the states, they only take the paper bills. So we had 500 and 100 Yen coins we decided to deposit at the arcade. It was the cool seeing Neon Genesis Evangelion posters, billboards and such being advertised everywhere. We even found people sized figures of Asuka and Rei at arcades as well.

We made our way back to the area of Tokyo that we were staying at. We decided to go to the park that we saw when we first arrived in Tokyo. The park was very large and it was smack in the middle of the city. There were ponds of koi fish, turtles, and lots of flowers.

We found one turtle that was swimming and as we watched him he made his way towards us and actually got out of the water and walked up to us. We would hold our hand out and it would try to touch it with his nose. I haven’t seen anything like that before. We took some really good videos of the turtle before he worked his way back into the water.

We sat at a park table as it started to rain and we talked about our favorite aspects of the trip. We headed back to the hotel to grab our stuff before we headed to the airport to fly out that night. We landed back in the states safe and sound 🙂 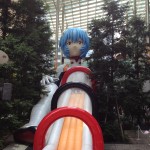 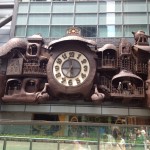 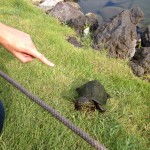 *(First image is of the Rei Ayanami slide, next is the giant steampunk clock, the third is of a curious turtle that came out of the water to greet us, finally a close up of some flowers).

Day 7 was another travel day. We were leaving the countryside from our 3 day retreat of relaxing at the ryokan and enjoying the onsen and heading back to Tokyo. I had such a great time at the coastline that I decided that I was going to wake up and catch the first train back to the coastline and was going to meet up with the group at a train station outside of Tokyo. I wanted to explore and hike more for a few hours since there was such a large area and we were only there for a couple hours. I fell in love with that countryside over the course of 3 days.

The first train of the day started at around 5AM in the morning so I got up early and snuck out of the ryokan ninja style and made my way to the train station. The trains had a brief stop at another station where I was suppose to get off but failed to. So I had to take the train again and only lost a little bit of time before I made it down to the coast.

I was able to hike around the area for a few hours, it was very calm with almost no other travelers or hikers around. I did see a lot of fast and small bugs on a trail but I didn’t get a chance to take a picture to find out what they were.  That morning was a little wet and rainy, one of the few days it rained while we were there.

After I got my hiking in, I made my way back to the train station and met up with the group several stops down the line. Some of them were pretty surprised I woke up so early to go out hiking. As the train made its way closer to Tokyo, the rain started to subside and the sun started to peek through the clouds and shine.

Our first destination was to head to Odaiba. Odaiba was having a giant fireworks display that night, but Comiket was also going on. Comiket is a super huge comic convention. So needless to say there were thousands and thousands of people in the area and everywhere was extremely packed with people. We worked our way through the crowds at a mall and went shopping at the Shonen Jump store. I was hoping to score some Dragonball Z stuff, but it was mostly relegated to just some manga. The store was packed with One Piece and Naruto stuff.

Post-Shonen Jump store, a couple of us made our way to the Gundam Plaza to see the RX-78 gundam. Who doesn’t like giant robots? The Gundam activated and did its thing, after that it was on to an arcade. I played a few crane games and won myself some Pokemon from the machine. I am a sucker for toys that look cool, such as an Axew. Unfortunately, I ran out of 100 Yen coins and someone won 2 toys that I got close to winning from the machine. It’s all good though, they went to 2 little kids that were pretty stoked to get a toy that day. i think my favorite aspect of the arcades is that the crane games are completely winnable, lots of us won toys from machines. When you win at a machine people working at the arcades will announce it over the speakers in the arcade so others know that people are winning and on what machine.

After the arcade we grabbed some eats and headed to our tarp for fireworks. The fireworks display was solid and lasted well over an hour. The trains were packed leaving Odaiba.

As we approached our hotel again, some of us decided to sing some karaoke. We went to a karaoke bar and got a room that fit all 14 of us in and we proceeded to drink, sing and have a great time. Next weeks Japan adventure day is one of the sole reasons I went to Japan, stay tuned 😀

*(first image is of the sunrise outside of the ryokan, second is an image of the rainy day from my seat on the train, the third is a cool building I saw on the way to the coastline, the fourth is the Shonen Jump store and how packed it was that day, fifth is the Gundam Front, finally is the crowd that was there for fireworks that night).